Kurukshetra is a holy land that witnessed the fiercest battle of Indian history, the Great Mahabharata. It is ironically the cradle of ancient texts, holy inscriptions, and reminiscences of prehistoric times. Its devout sites are spiritually binding and fascinating enough to attract hordes of tourists to this place. It is also referred to as Dharmakshetra in vedic texts where Kurukshetra is the name given to 48 kos Kurukshetra Bhumi that encompasses numerous tiraths, tanks, and religious places. This pilgrimage destination of Haryana has so much to offer in its excursions as well. These nearby religious sites and historical places must be affixed on your itinerary to this holy city. 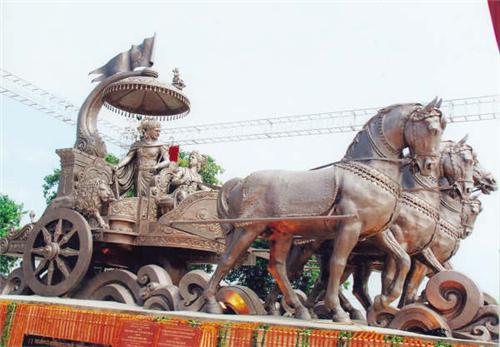 Tirath Sthal in and around Kurukshetra

Famous Pilgrimage near Kurukshetra are:

This place is located around 20 km from Kurukshetra. Jhansa is a small village known for its beautiful rivers and canals. There is the famous Markanda Temple in this village. Built on the banks of Markanda River, this ancient temple draws lots of tourists to this place. Jhansa offers quite picturesque spectacle at the confluence of Markanda River and SYL Bhakra Canal. 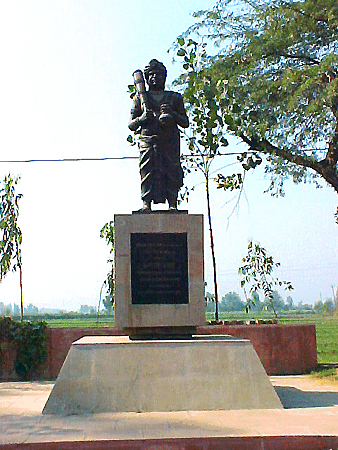 It is a popular shrine at a distance of 6 km from Kurukshetra. This place in Bir Pipli is situated on the banks of Saraswati River and it is a venerated shrine that is counted among four cardinal yakshas in Kurukshetra.

It is said to be the entry point for the pious Kurukshetra Bhumi. Devotees commence their pilgrimage from here after taking holy bath in Saraswati River and seeking the blessings of Rantuka Yaksha at this holy place.

This place, in actual, is an archeological mound situated near Kurukshetra University. This mound which is about 9-12 meters in height is located in village Mirzapur and was excavated in 1922-23 by Mr. D B Spoorer. This mound has revealed quite striking evidences relating to pre Harappan era. Presence of three period of occupation is suspected here. These include first period from 400 BC to 100 BC which is proven by painted grey ware, second period from 100 BC to 3rd century AD by red polished ware, and third period of late medieval era represented by Muslim glazed ware and lakhauri bricks. A large step well and some terra cotta pieces are also found at this interesting place of historical importance. 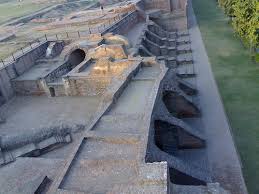 Located at Thanesar near Kurukshetra, this place is also a famous excavation site. It is perfect for those having interest in history as this mound has revealed artifacts and other evidences dating back from Kushana dynasty to Mughal era.

It is around 1km long, 750 m wide, and 15-18 m high. Red polished ware excavated from this site suggests their existence since post Gupta period. It also has a Mughal style garden with Charbagh pattern.

This ancient temple is dedicated to Pashupatinath, the 24th incarnation of Lord Shiva. It is situated near Kurukshetra in Pehowa region. In fact, it is a temple complex with 5 ancient temples out of which Pashupatinath Temple is the oldest. The temple houses huge black colored lingam made from chlorite schist. It was supposedly built around 16-17th century AD and it is one among the very rare Pashupatinath temples in the world. 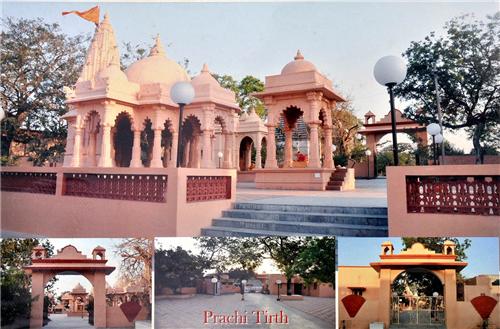 Prachi Tirath is situated at a distance of 28 km from Kurukshetra and it is famous for its numerous temples of prehistoric times. Due to easterly flow of Saraswati River at this place, it is called Prachi (East) Tirath. It has some reminiscences of some ancient temples relating to 9-10th century on the banks of Saraswati. The present temples at this place near Kurukshetra are dated back to 17th-18th century AD. Among these temples, Shiva Temple is the largest and quite significant one.

This tirath dedicated to famous sage Kapil Muni is located 80 km away from Kurukshetra at Kalayat, which is a small village near Narwana. This place was named after Kapil Muni as Kapilayat which later was changed as Kalayat. This renowned pilgrimage of 48 kos Kurukshetra Bhumi has some of the rarest architectural marvels of ancient times. There is a temple of Kapil Muni along with a sacred pond in which thousands of devotees take a bath every year to absolve their sins. 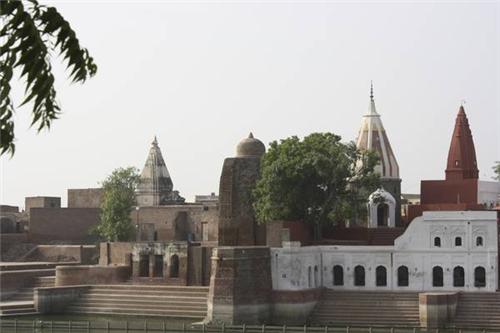 It also has a brick temple that was supposedly built during 7th century AD by King Salwan, a legendary ruler of that time. Having tolerated the grunt of time and extreme weather conditions, this temple still stands tall as a rare brick temple of India. The façade of this temple is adorned with molded bricks. It was constructed in Nagara style of architecture with its typical curvilinear spire marking the magnificence of this Panchratha Temple. 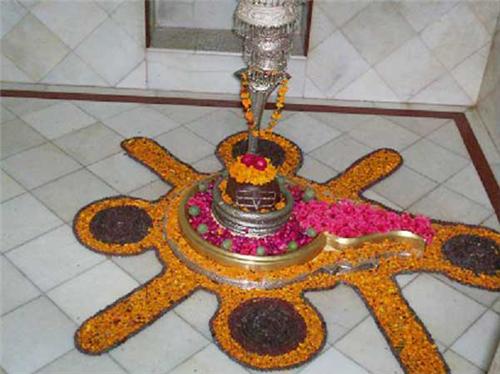 This religious place is located about 31 km away from Kurukshetra town. This place witnesses the confluence of River Saraswati with River Aruna. There is a huge and famous temple Sangameshwar Mahadev Mandir in this tirath which makes it quite popular excursion from Kurukshetra. This tirath in actual is related to revered saints Vishwamitra and Vashishtha. It has its references being made in ancient texts of Mahabharata and Vamana Purana.

This tirath is situated in Pharal which is about 33 km from Kurukshetra. This place is named after a famous saint of this region. Pharal comes in seven ancient forests of Kurukshetra region and has its references in Vamana Purana and Mahabharata as well. This is a place where pind daan can be done on Somvati Amavasya of Sravan month. 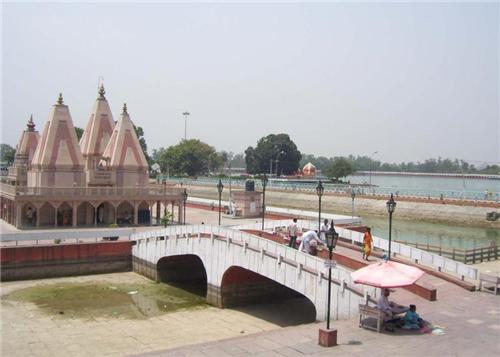 This is a rare phenomenon that takes place once in 10-12 years and on this occasion, pind daan can be offered only at Phalgu tirath. Hence, it is called as Gaya of northern region. As per the legends, this privilege was given to Phalgu by a demon that lived in these forests and gave it as boon to saint Phalgu.

This tirath is located at a distance of 18 km from Kurukshetra. It is a rare and in fact, only tirath dedicated to Pavan Dev, the Wind God. As per the holy texts of Padma Purana and Vamana Puran, this tirath is supreme amongst all 49 Maruta tirathas. Hence, whosoever takes a holy dip in this tank is believed to attain supreme position in Vayulok. Hence, this place is a famous shrine in this region. 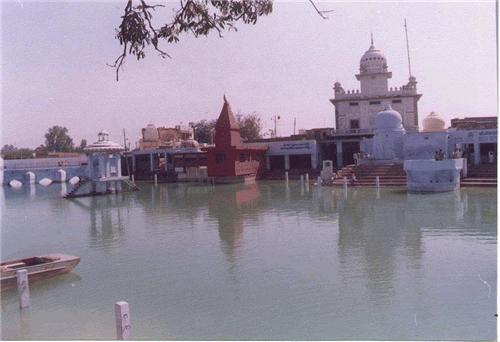 Saraswati Tirath is located around 26 km away from main Kurukshetra city. This supreme pilgrimage is associated with the sacred and Vedic Saraswati River. It is quite revered for pind daan in its huge tank called as Saraswati Tirath. Thousands of devotees come to this place for offering shraddha of their ancestors as such.

This tirath situated 26 km away from Kurukshetra is the pious land where Lord Brahma laid the caste system by dividing people according to birth in castes, Brahman, Vaishya, Kshatriya, and Shudra. Those who take a dip with complete devotion at this place are believed to attain Brahmayoni. 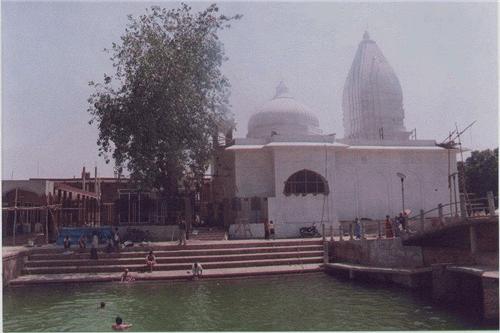 Located at distance of 26 km from Kurukshetra, this tirath is one of the most important pilgrimages of Kurukshetra bhumi. It was named after a great king, Prithudak who was famous for devotion towards his father. There is an ancient temple at this place which represents the rich cultural heritage of this tirath. The present brick structures, inscriptions, and murals of this temple relates to the era of Pratihar ruler Mahendra Pal of this region.

This farm at Bhor Saidan village is situated 22 km away from Kurukshetra on Pehowa- Kurukshetra Road. It has current strength of 25 crocodiles. This farm spread over area of 15 acres, 6 kanal and 2 marlas has a high erected mound inside tank to watch crocodile from a short range.

Along with being an industrial town, Shahabad is also quite an interesting place for tourism. The famous religious places of Shahabad include Markandeshwar Mandir, Gurudwara Mastgarh, Gurudwara Manji Sahib, and shrine of Nau Gaja Peer.

Markandeshwar Temple is built on banks of Markanda River which is a tributary of Ghaggar River. It is named after famous saint Maharishi Markandeya whose many ancient ashrams were situated along this river. This temple originally is said to be built in 3rd millennium BC but the present structure was constructed around the beginning of 20th century. 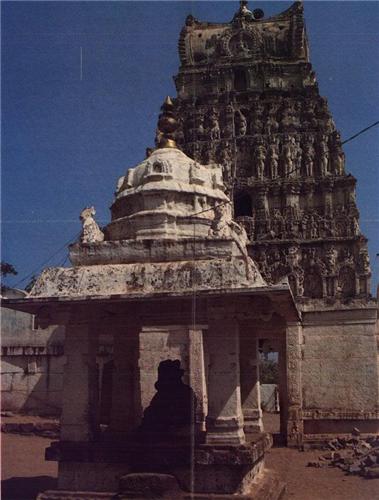 Gurudwara Mastgarh was established by demolishing an old mosque built by Shah Jahan in Shahabad. Its first granthi was Bhai Prem Singh from Nanded Hazur Sahib. This ancient Gurudwara was reconstructed some years ago and it is a prominent Sikh pilgrimage here. Gurudwara Manji Sahib was built here in dedication to Baba Banda Singh ji Bahadur when he camped here on orders of Guru Gobind Singh ji.

Nau Gaja Peer was a saint with height of 9 Gaj or 8 meters 36 cm. He used to reside in Shahabad and he followed the twin religions of Hinduism and Islam. Hence, this place has a tomb and Shiva Temple built near each other.

Apart from these famous tourist places, there are many other archeological sites located around Kurukshetra. These include Asthipura, Daulatpur, and Bhagwanpura. These sites present historical reminiscences in the form of bones of the slain soldiers of Mahabharata war and painted grey ware culture of late Harappan era.