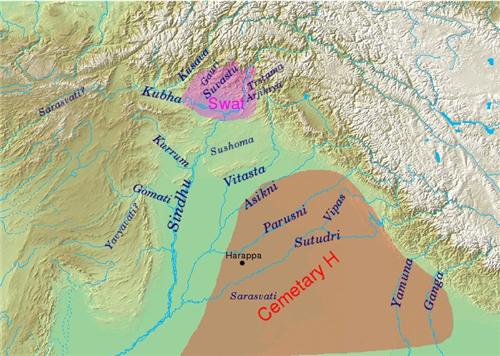 The Kurukshetra district is located at north-eastern part of the state of Haryana. It is bordered by five districts namely Ambala, Karnal, Yamuna Nagar and Kaithal of Haryana and Patiala of Punjab.The district sprawls across an area of 1530 sq. km. It is bounded by the region at latitudes of 29053’00”N and 30015’02”N and longitudes of 76026’27”E to 7707’57”E. Its area covers 3.46% of the area of Haryana state. The topographical map of Kurukshetra district can be referred to the Toposheets of 53B & 53C of Survey of India.

Kurukshetra lies at an altitude of 260m above sea level. Owing to its location far away from sea and open to dry cold wave from north-west Kurukshetra experiences near extreme climatic condition. A cycle of five seasons maintain the weather condition throughout the year.  These are summer, followed by monsoon or rainy season, autumn, followed by winter, spring coming at the end of year.

Summer brings long very hot days followed by pleasant evenings. From end of March it continues till the end of June. Mercury at noon reaches 400C in the open followed by comparative cool nights. Summer nights are pleasant and the temperature varies from 200C to 250C.

Monsoon starts at the end of June and extends up to September. Average 81% of annual rainfall provides fair amount of water in the rainy season. Rain comes twice a year, the second phase occur during winter which help the farmers in harvesting of Rabi corp. The rest of annual rainfall occurs during the winter season. 582 mm. of average rainfall occurs annually in Kurukshetra district. This rainfall is not distributed evenly across the district. The rainfall gradually decreases from north-east to south-west. Shahabad receives more 800 mm. of annual rainfall whereas the region around Pehowa receives less than 500 mm. of rainfall. The temperature during monsoon remains pleasant.

Autumn stretches till November and ends knocking at the door of winter. All through the autumn season the weather remains pleasant though at times the day temperature rises sharply. The festive season starts at autumn and continues till spring.

From mid-February till end of March the temperature remains most pleasant. It is the spring season which gives relief from chilly nights. This is the most sought after season by the Kurukshetra populace. Temperature ranges from 100C to 250C throughout day and night.

Hottest days: May to June
Coldest days: December to January
Best time to visit Kurukshetra: February to March
Altitude: Kurukshetra has an average elevation of 241m to 274 m above sea level. The land has a gradual slope towards south-west from north-east. 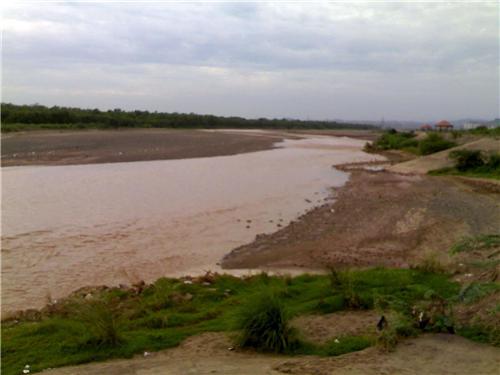 There is no perennial river in Kurukshetra district. The river Markhanda, after coming out from the Nahan hills, flows through the district across the north-west part. Holy rivers Yamuna and Saraswati flow along the eastern and northern boundaries respectively.

There are a few irrigation canals or nalas which play important role. The popular Sutlej-Yamuna-Link  canal joining the Sutlej and Yamuna flows across Kurukshetra. Narwana canal which is a branch canal of Bhakra passes through Kurukshetra and is considered as life line of the Haryana state. There are a few local nalas namely Omla, Khand and Chautang. These nalas help in irrigation and carry the excess water during heavy rainfall.

The Kurukshetra soil has an even pale brown colour. The pH value indicates the soil to be mild to strongly alkaline in nature. The soil has low permeability and does not drain well. Moisture content is high. The soil type is loam, sandy loam or clayey loam.